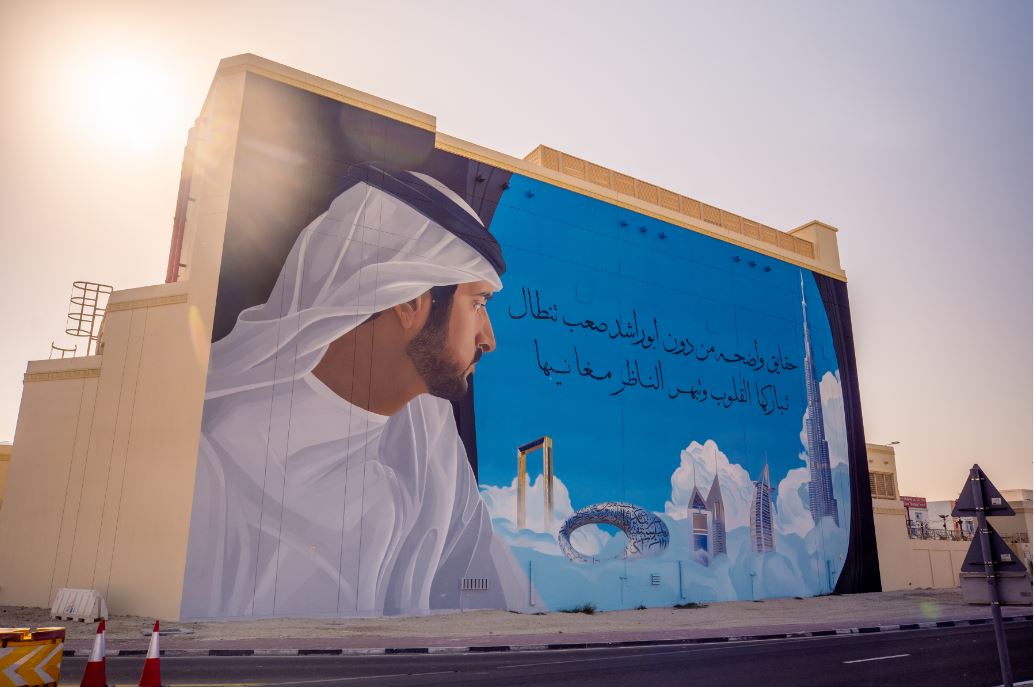 Brand Dubai, the creative arm of the Dubai Government Media Office (GDMO), and the Dubai Electricity and Water Authority (DEWA) today announced the completion of a new mural depicting the Crown Prince of Dubai His Highness Sheikh Hamdan Bin Mohammed Bin Rashid Al Maktoum. Performed as part of Dubai Street Museum’s 8th edition on the wall of the DEWA substation on Al Wasl Road, the painting was a collaborative effort between local and international artists.

The mural, 18 metres high and 32 metres wide, depicts the Crown Prince of Dubai looking out over the city’s iconic landmarks from the porthole of an aircraft. The world-famous structures, including the Burj Khalifa, Burj Al Arab, Emirates Towers, Museum of the Future and Dubai Frame, symbolise the scale of progress Dubai has made over the past few decades.

Hawla Al Mehairi, executive vice president for strategy and government communications at DEWA, said: “DEWA is delighted to join forces with Brand Dubai for its latest mural project, which aims to enrich Dubai’s creative environment as well as highlight its modernity and status as a centre of innovation. Dubai has become known globally as the city of the future, ranking at the top of global competitiveness rankings and setting an example for the world in sustainable development. The latest mural depicting the architectural wonders of Dubai is a reflection of Dubai’s various achievements and its constant movement towards progress and excellence.”

Shaima Al Suwaidi, city branding manager at Brand Dubai, said: “We are delighted to once again partner with the Dubai Electricity and Water Authority to launch projects that celebrate creativity and enrich residents’ experience of Dubai’s urban environment. The recently unveiled mural pays tribute to the futuristic vision of His Highness Sheikh Mohammed Bin Rashid Al Maktoum, which has made Dubai a significant advancement to become one of the world’s leading cities. By working with local and international artists, we aim to communicate Dubai’s unique culture, values, identity and aspirations. Through these initiatives, we also aim to add unique and creative elements to the built environment in urban communities.”

Previous editions of the Dubai Street Museum initiative have focused on creating a plethora of public artworks designed to highlight the emirate’s futuristic spirit, rich heritage and show the connection between its past and present.

.@Brand_Dubai, the creative arm of @DXBMediaOffice & @DEWAOfficial announces the completion of a new mural portraying the Dubai Crown Prince @HamdanMohammed as part of the 8th edition of Dubai Street Museum. pic.twitter.com/IptgxC02em