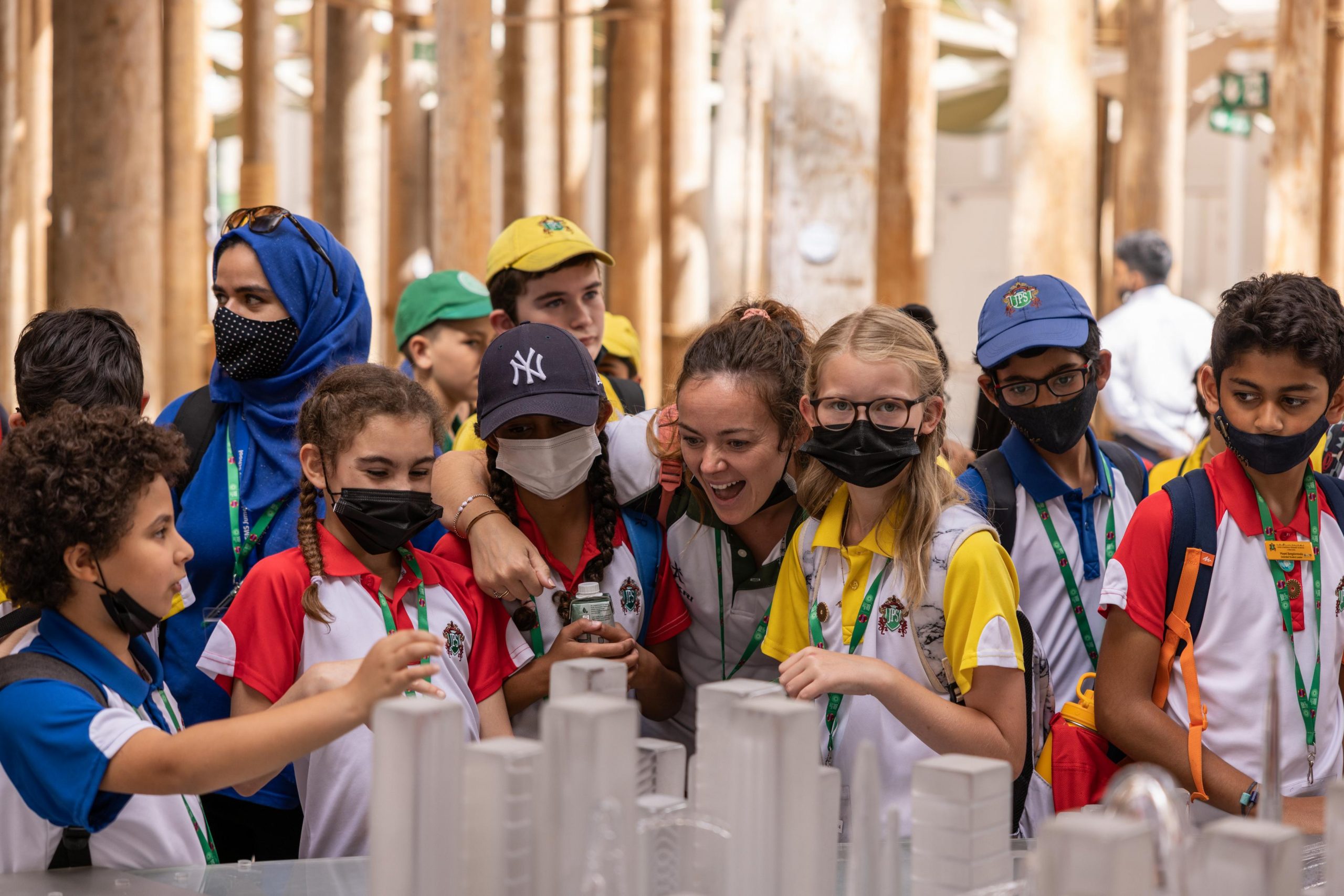 Expo 2020 Dubai’s focus on children and education has helped boost attendance, which soared to 19,009,065, up nearly 1.6 million in a week, with 2.7 million children under 18 visiting the venue since the event opened last October.

Earlier this month, the world’s youngest TEDx speaker, six-year-old Kiara Kaur, addressed the adult gathering with “Small Change is Big Difference” in the Mexico Pavilion, and spoke throughout the venue as part of International Women’s Week activities, while children attending the Dubai Cares Pavilion designed a “dream school” to help a theoretically earthquake-stricken neighborhood.

On March 5, a group of young student innovators and their teachers gathered at the Dubai Expo Center for the fourth Emirates Young Scientists Competition, part of the National Festival of Science, Technology and Innovation (NSTI), to showcase their inventions to create a better future.

The Expo’s school program offers four exciting journeys, allowing students to go on educational tours of three vibrant thematic areas (Opportunity, Mobility and Sustainability), as well as pavilions with activities corresponding to the various school programs in the UAE.

On Friday, March 18, in honor of Haq Al Laila, Expo 2020 Dubai, together with the Ministry of Culture and the Ministry of Community Development, invites children and families to take part in a fun, exciting and unique event in Al Forsan Park. Haq Al Laila is a time of celebration that symbolizes giving and is celebrated on the 15th of Shaaban, ahead of the arrival of the holy month of Ramadan two weeks later. In the evening, Emirati children don colorful traditional clothes and go door to door in their neighborhood, singing a song in exchange for sweets.

As for other highlights at the venue, last week’s Al Wasl stage featured the unique voice of Emirati superstar Hussain Al Jasmi, an ambassador for Expo 2020 Dubai and one of the performers of This Is Our Time, in an unusual lineup.

International Women’s Day on March 8 had a theme of #BreakTheBias and brought together a host of impressive speakers, including H.E. Ohud Al Roumi, UAE Minister of State for Government Development and Future, who opened the event, Anita Bhatia, UN Women’s Assistant Secretary General and Deputy Executive Director, and Hollywood star Rami Malek, who called on men to correct the mistakes of the past and empower women of the future.

Formula One favorite Lewis Hamilton caused a stir in Al Wasl Plaza on March 14, taking part in a Q&A conversation about his life as this generation’s greatest driver.

Next week promises to be even more eventful, starting with Jalsat Nights on March 15 – jam sessions led by Khaliji to showcase the best of Arabic music and culture – and the novelty Filipino pop-rock band Parokya Ni Edgar, which will take the stage March 18.

Expo Sports Arena invites attendees to take part in a Guinness Record attempt to set the Guinness record for the number of nationalities present in a fitness class at the same time, March 17, or immerse themselves in meditation with the Dylan Werner Fitness Special, March 15.

The last themed week of Expo 2020 Dubai, Water Week, will begin March 20. Raising awareness that water is a limited source and currently under threat, the Week is a call for collective global action and looks at what we can all do to become active agents of change.

If that’s not enough, International Happiness Day on March 20 should bring a smile to everyone’s face, as the day is full of special moments, from yoga at the Surreal water feature to a “Sparks of Joy” route around special happiness events in the pavilions.

Underscoring Expo 2020’s look to the future and focus on young minds, teachers and children will be among the honorary VIP guests at the Expo 2020 Dubai closing ceremony at Al Wasl Plaza on March 31. The number of virtual visitors to Expo 2020 Dubai exceeded 180 million, helped by the variety of entertainment available through Live@Expo and the extensive coverage of the Expo 2020 Dubai program for people and the planet.