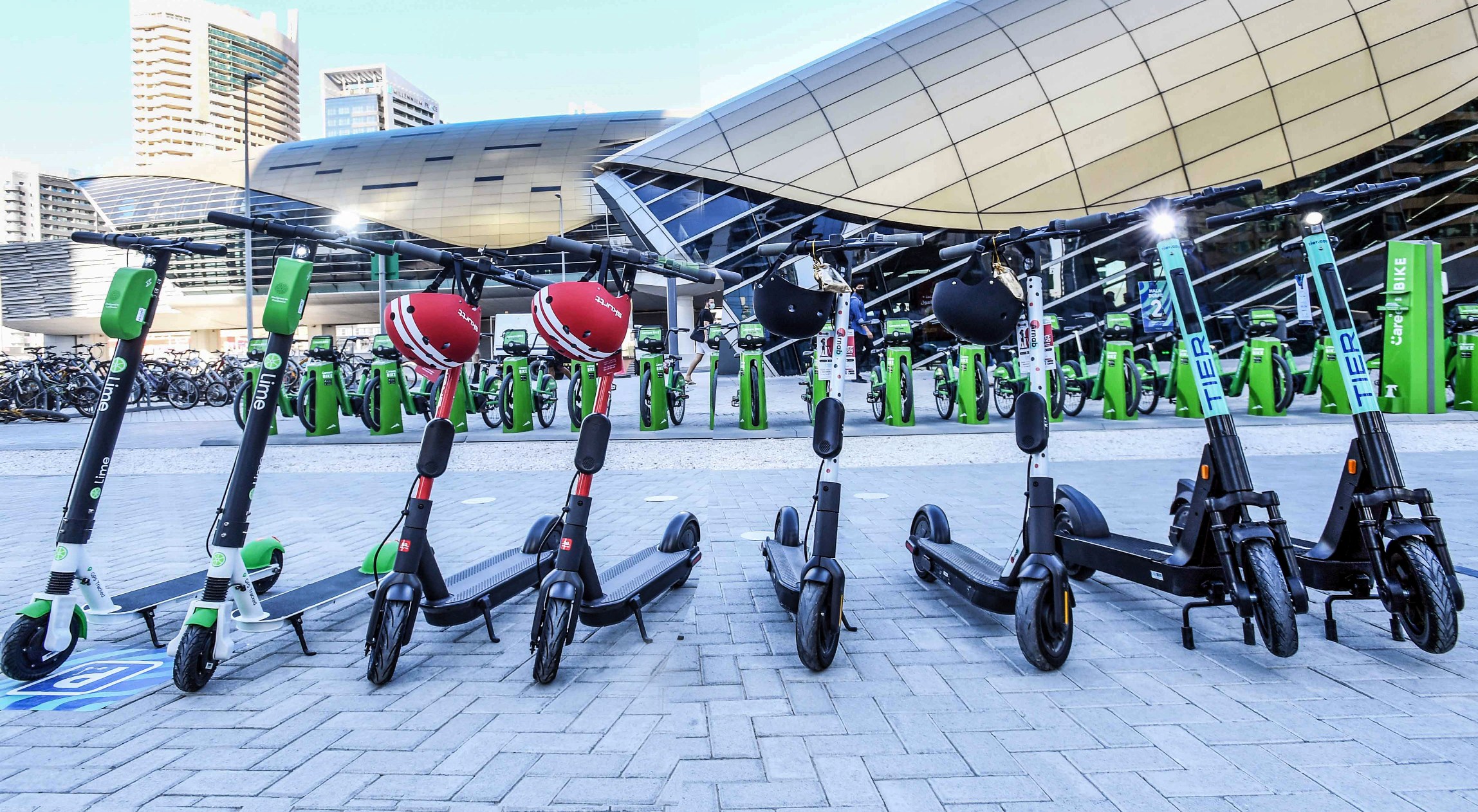 The Dubai Roads and Transport Authority (RTA) and the Dubai Police Headquarters have announced the launch of e-scooters on permitted bicycle lanes in 10 areas of Dubai, starting Wednesday, April 13, 2022.

The move comes in accordance with Resolution No. 13 for 2022, approved by His Highness Sheikh Hamdan bin Mohammed bin Rashid Al Maktoum, Crown Prince of Dubai, Chairman of the Executive Council, regulating the use of scooters in Dubai. He supports efforts to make Dubai a bicycle-friendly city, and sums up the huge success of the e-scooter trial, which began in October 2020.

Executive Council Resolution No. 13 of 2022 specifies the specifications applicable to e-scooters and bicycles, which include a white headlight, a red and reflective light on the back, a horn attached to the steering arm (T-bar), brakes on the front and rear tires, tire size must be proportional to the size of the scooter, road tires for the paths specified by RTA and the scooter size must be proportional to the size of its driver. In this regard, the RTA urges the public to choose quality e-scooters to avoid battery burning accidents and frequent technical malfunctions.

The ordinance establishes a number of obligations on the part of the owner of an electric scooter/bicycle, in particular, to comply with traffic laws and to ride an e-scooter owned by individuals and companies or rented for personal use only within the permitted areas and paths announced by the RTA. They must not ride scooters on paths designated for walking or running. They must not exceed the speed limit set by the RTA for those paths and avoid riding any other type of scooter designated by the RTA on safe roads without obtaining a driving permit.

The RTA will launch an awareness campaign to make scooter drivers aware of the rules and places designated for their use and the importance of obtaining a permit to drive an e-scooter through the RTA’s online platform. Obtaining this permit will be a prerequisite for permission to ride scooters on safe roads in declared areas. However, holders of a motor vehicle driver’s license, international driver’s license or motorcycle license cannot obtain this permit.

The ordinance specifies the e-scooter driver’s duties to ensure full compliance with the RTA’s safety and security requirements. They include wearing reflective vests and helmets, not carrying passengers on bicycles and e-scooters unless bicycles have separate seats for them, not carrying passengers on pads or anything that causes imbalance on the electric scooter, and keeping a safe distance from other vehicles and pedestrians.

It also states that bicyclists should not use their e-bikes on roads with speed limits greater than 60 kilometers per hour, and adhere to safe driving and public safety conditions.

They must be cautious and refrain from actions that pose a risk to the life and safety of the cyclist or others, such as hitching onto a vehicle while cycling, zig-zagging or riding with one hand, except when signaling with your hand.

The RTA has designated public electric scooter parking areas along designated lanes and permitted areas. They are mostly located near key tourist attractions and near public transportation stations. The goal is to encourage residents and visitors to use e-scooters for first- and last-mile rides while preserving the emirate’s great views.

The RTA encouraged cyclists to park the operators’ e-scooters only in designated parking spaces. Parked scooters should not interfere with traffic and pedestrians or the use of public parking. It urged them not to violate the conditions and rules of the Ordinance and the decisions made thereunder.

The ordinance states that parking a bicycle or e-scooter not in designated parking spaces in such a way that it may obstruct traffic and pedestrians or pose a danger to road users is subject to a fine of 200 dirhams.