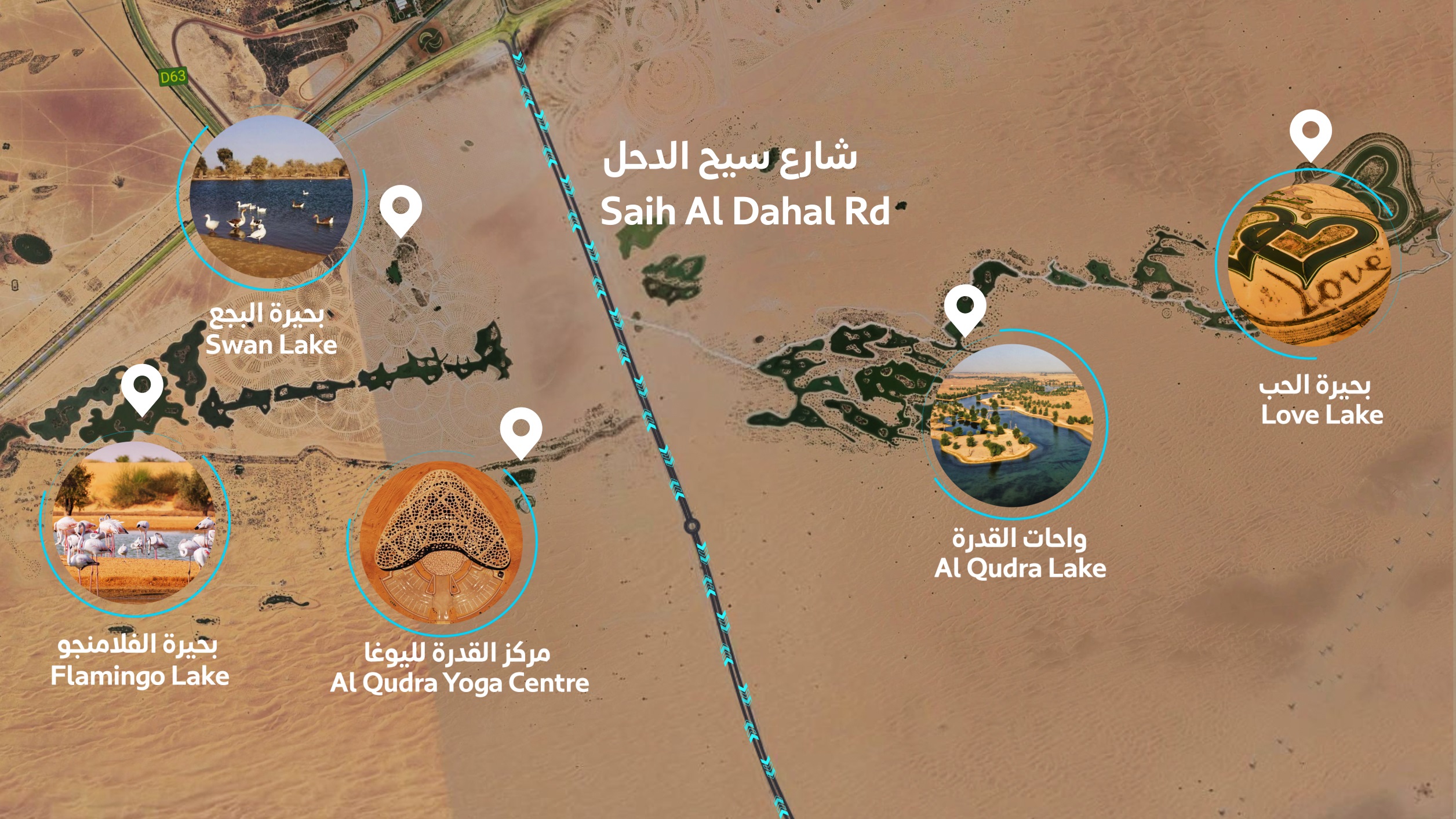 The Dubai Roads and Transport Authority (RTA) has announced the opening of the Saikh Al Dahal Road Improvement Project, which connects Saikh Al Salaam Road to Mohammed Bin Rashid Al Maktoum Sun Park, in May this year. The old single-lane road will be dismantled and replaced by an 11km dual carriageway with two lanes in each direction as well as a median strip and three roundabouts to facilitate traffic in all directions. The new road will connect to the entry points of Al-Qudra Lakes.

“The project aims to increase the capacity of the road from the existing 1,800 vehicles to 4,000 vehicles in each direction to accommodate the constant increase in traffic and facilitate the movement of residents and visitors to the oasis on both sides of the road, desert areas and Mohammed Bin Rashid Al Maktoum Sun Park,” said H E Mattar Al Tayer, Director General, Chairman of the Roads and Transport Authority Board of Executive Directors.

“The project starts from the R/A at the intersection of Saikh Al Dahal Road with Saikh Al Salaam Road in the north, just after Al Qudra Bicycle Station, and heads towards Mohammed Bin Rashid Al Maktoum Sunshine Park in the south. The project includes the construction of a new road with two lanes in each direction and three P/Es along the road to facilitate road users’ access to oases on both sides of the road, Al Qudra Lakes, desert areas as well as U-turns,” explained Al Tayer.

“The project complements a series of projects completed by the RTA in the area, such as the 23km Dubai Cycle Path, which connects to the existing cycle path in Saikh Al Salaam, which runs along Al Qudra Road at the Dubai Cycle Path gate towards Emirates Road. From there it connects to Latif bint Hamdan Road, Sheikh Mohammed bin Zayed Road, Al Barari area and all the way to Nad Al Sheba area. The cycling path at Saikh Al Salam, about 115km long, is equipped with a number of facilities, including bicycle and accessory rental shops, a fully equipped clinic and 10 rest areas along the cycle path equipped with bicycle seats and racks,” Al Tayer added.

RTA has implemented several development projects in the area, including the widening of Saikh Al Salaam Road on the 21km stretch from R/A Al Qudra, where the cycling rest area is located, to the intersection with Dubai Al Ain Road via Al Lisaili and Al Marmum. Nine S/As are being constructed at the intersections to ease traffic flow and improve safety in the area. Projects also include the construction of four camel and horse crossings, a cycle path, service roads, parking spaces and the expansion of the existing parking at Dubai International Endurance Village in addition to street lighting and rainwater drainage networks.

.@rta_dubai opens Saih Al-Dahal Road Improvement Project in May. The Improvements will increase the capacity of the road from 1800 vehicles to 4000 vehicles per directionhttps://t.co/BZFjVh7QJy pic.twitter.com/QmasbGGIAj