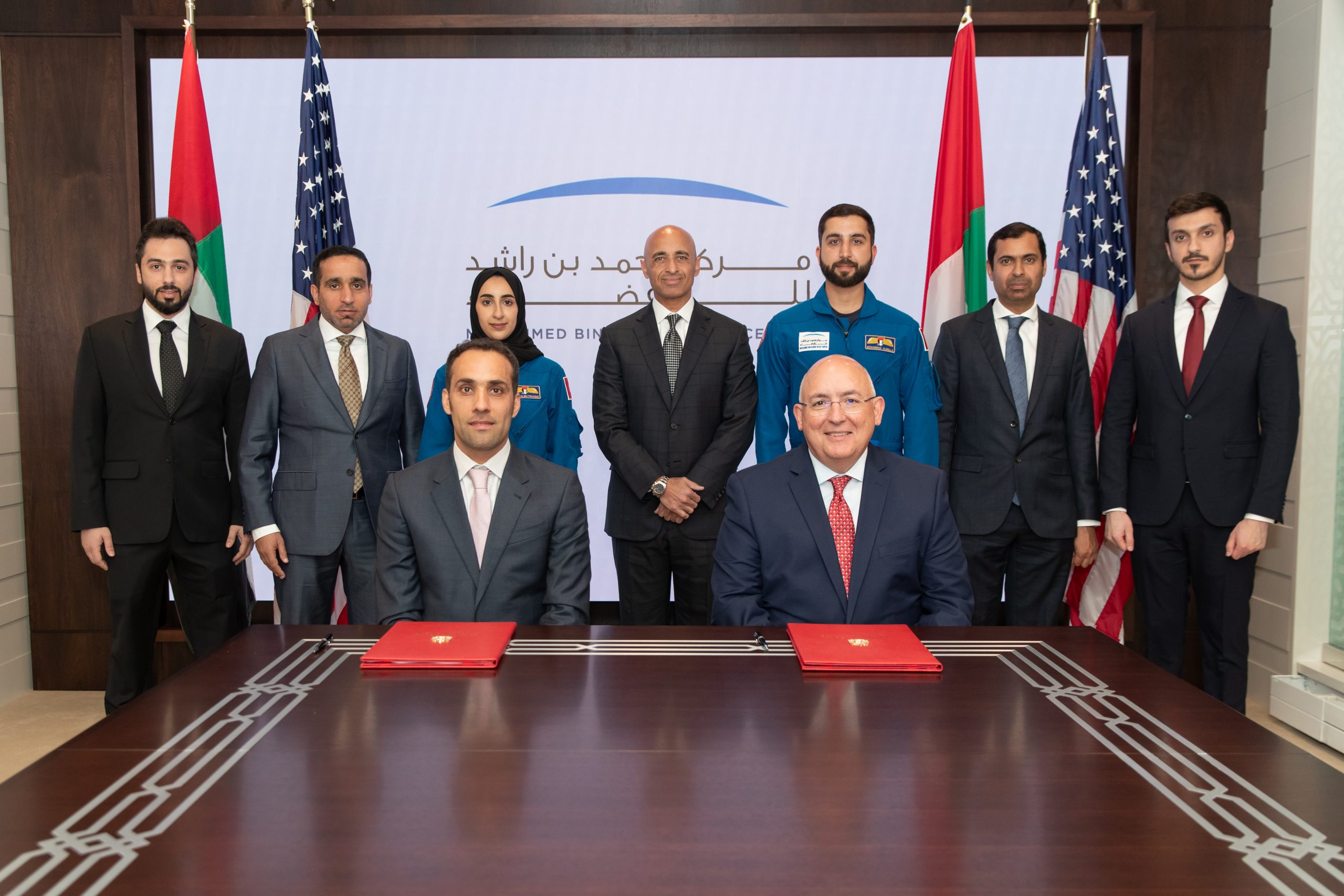 MBRSC to send Emirati astronaut to the International Space Station

His Highness Sheikh Mohammed Bin Rashid Al Maktoum, Vice President and Prime Minister of the UAE and Ruler of Dubai, said: “We launched the UAE Astronaut programme more than five years ago… The UAE sent the first Arab astronaut on a historic journey to the International Space Station… Today we are announcing a new collaboration between the UAE and the United States of America to send an Emirati astronaut on the first long-term mission aboard the International Space Station.”

His Highness Sheikh Mohammed bin Rashid Al Maktoum added: “The signing of the agreement to send the first Arab astronaut on a long-term mission for 180 days to the International Space Station is a new milestone for the UAE’s space sector. The UAE will become one of the 11 countries in the world to have carried out long-term space missions.”

His Highness Sheikh Mohammed bin Rashid Al Maktoum said: “Our space sector is constantly evolving. The new mission will add new experience and knowledge to the Emirati astronaut and scientific community,” the UAE will continue its ambitions in the space sector.”

The deal will further strengthen the cooperation between MBRSC and the US space agency NASA, as the two organisations will actively collaborate during the six-month mission. Four MBRSC astronauts are currently undergoing training at NASA’s Johnson Space Center in Houston, this training will prepare them for long human spaceflight.

The agreement between MBRSC and Axiom Space was signed at the United Arab Emirates Embassy in Washington. The signing ceremony was attended by H.E. Yousef Al Otayba, UAE Ambassador to the US, H.E. Hamad Obaid Al Mansouri, MBRSC Chairman, and H.E. Yusuf Hamad Al Shaibani, MBRSC Vice Chairman, as well as astronauts Nora Al Matrushi and Mohammed Al Mulla. The agreement was signed at the US Embassy by both parties: H.E. Salem Al-Marri, Director General of the Centre, on behalf of the Centre, and Michael Suffredini, President and CEO of Axiom Space.

The mission marks another major milestone for the UAE’s national space programme, with another Emirati astronaut being sent to the ISS, marking the longest stay of an Emirati or Arab astronaut in space. This follows the historic feat of Hazzaa Al Mansouri, who reached the space station in a Soyuz MS15 spacecraft on 25 September 2019. At the end of the mission, Al Mansouri returned to Earth eight days later, bringing with him important data and information from several scientific experiments he conducted during his stay.

Through the success of the new mission, MBRSC hopes to inspire a new generation of Emiratis who will choose a career in the space industry and conduct research that will help strengthen our position in the international space sector, where so far only a few countries have succeeded.

Until now, only a few countries have been able to send astronauts on long-term missions to the ISS, and the UAE is the latest country to join this elite list. Upon completion of the mission, the Emirates will have the honorary right to become the first Arab country to undertake a mission with a long stay on the space station.

The United Arab Emirates has announced the launch of a new space mission to the International Space Station that will last for six months. @MBRSpaceCentre signed a new strategic cooperation in human spaceflight with Axiom Space Inc. #UAE https://t.co/bfavo8rZ83 pic.twitter.com/k2gZhnQ26B