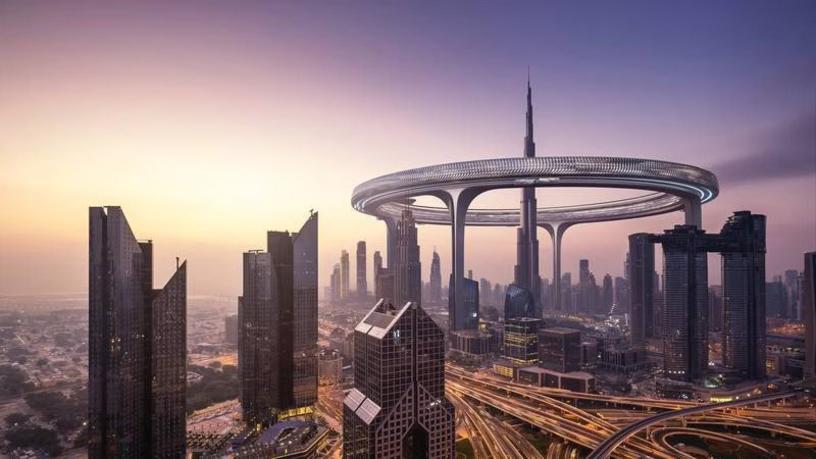 Dubai’s world-famous centre could be transformed beyond recognition by the ambitious new megaproject Downtown Circle, proposed by architecture bureau Znera Space. In renders published online, the Burj Khalifa, the world’s tallest building, has been encircled by a giant ring raised 550 meters above the ground.

The Downtown Circle, which is essentially a city within a city, is three kilometres in diameter, with residential, cultural, public and commercial buildings inside, as well as helipads and tramways on the ‘axis’. The architects also considered the residents’ need for green spaces, including parks, waterfalls and ponds.

It is worth noting that the design of the project was created during the pandemic, when the architects tried to rethink the idea of life in skyscrapers and design a new vertical city. So in the new design, they considered key urban planning issues, including food delivery, rubbish collection, and transport operations.

The Downtown Circle consists of five levels and has five points of support. The span of the circle itself consists of two rings connected by a green strip called Skypark: it connects the upper floors with the lower floors and creates a green urban ecosystem. In this way, the ‘ring city’ will be self-sustaining.

As part of the project, areas are proposed for rainwater harvesting, solar power generation, carbon storage, and pollutant filtration. The tram-cars would travel at 100km/h in a circle.