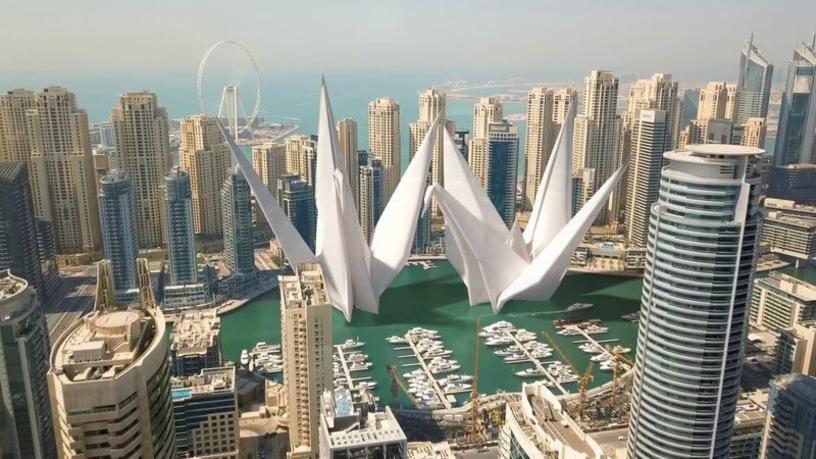 Dubai never ceases to amaze residents and visitors with new ideas – until recently we admired the digital photos of snow-covered sights, and now the bays of the emirate are flooded with giant origami sculptures.

Snow-white swans made of paper float in the water areas of Atlantis The Palm, paper boats ply the Dubai Creek and an origami horse hovers above the main highway in Dubai, the Sheikh Zayed Road.

The Indian artist Rohith Jagadisha brought all of these visions to life, dedicating a series of impressive images to his daughter. The sculptures have been placed next to the key landmarks of Dubai – Dubai Frame, Museum of the Future, Burj Khalifa skyscraper, Burj Al Arab resort and others.

The artist’s 3D fantasy has completely transformed Dubai, and his video piece ‘The World’s Biggest Origami in Dubai’ has quickly gone viral on Facebook, Instagram and even LinkedIn social media. It’s worth noting that the project took the artist, who has lived in Dubai for a long time, about a month to complete.

Snow sometimes falls in Abu Dhabi in winter – usually on top of Jebel Hafit in Al Ain. A series of digital images show what Qasr Al Watan Palace, the capital’s Corniche Quay and Sheikh Zayed Grand Mosque and other landmarks could look like if a snowy winter came to Abu Dhabi.

In March 2022, Joe John Mallor created a series of photographs that transformed Dubai into a winter fairytale. In the artistic photos, the famous water channels of the Madinat Jumeirah complex are covered in ice and ice floes float off the Persian Gulf coast.