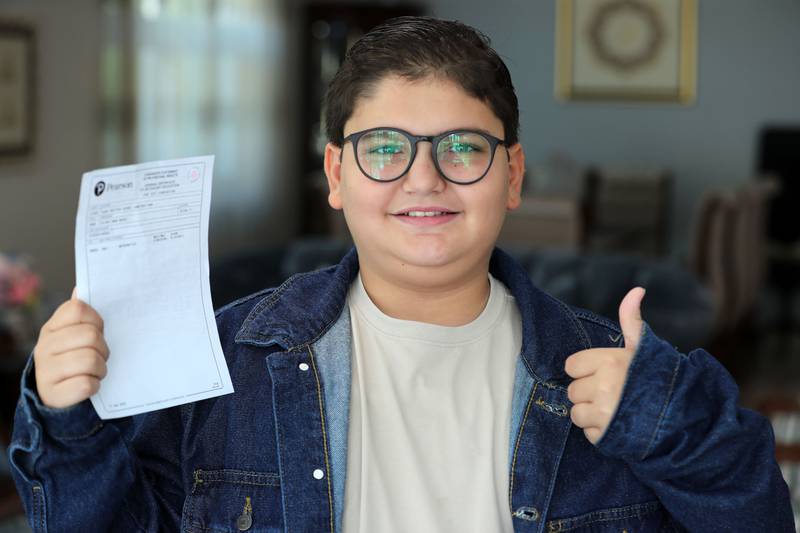 Omar Kilani, a sixth form pupil in Dubai, had long dreamed of taking his GCSE maths exams before his 11th birthday. Two days before the big day, Omar took the exam, which is usually taken by 16-year-olds in Year 11. When the results were published on Thursday, Omar found he had got an A*. The feat was all the more remarkable because for the past two years he has not been able to attend a single face-to-face maths lesson at Dubai British School Jumeirah Park due to Covid restrictions, but has continued to study online, with the help of his teacher and mother.

The Palestinian-Jordanian-American student is the youngest person to have taken the GCSE maths exam at this school.

“I have been preparing for this exam for two years and it was very difficult without face-to-face classes,” said Omar Kilani. “It was my dream to take GCSE maths before I turned 11… I wanted to challenge myself. I didn’t have face-to-face classes, so my teacher would assign me work and when I needed help I would write to her. Sometimes she was busy and I would go to my mother for help.”

The school did not have an accelerated learning programme, but Omar supported his dream of taking the exam early. Omar sat in the corner of the classroom while his fifth-grade peers went to their daily maths class and worked on individual maths assignments.

When asked what keeps him motivated, he said it was his mother and his determination to achieve his dreams. Omar plans to take his GCSE exams in physics two years early and wants to do his A-levels in maths next year or the year after. In the future, Omar Kilani says he wants to go into entrepreneurship in mathematics and science.

Rula Atallah, Omar’s mother and a former banker in the UAE, said the school had supported his ambition despite all the challenges.

“I am very proud of my son’s achievements and thank God. We are very happy; it is an excellent grade. My son dreamed of this when he was nine years old and he never attended any face-to-face classes. Everything was online. His teacher would post a video and send him a question on his iPad and when he got stuck, he would either text the teacher or ask me.” – Ms Atallah said.

Ms Atallah is also a mathematician, scoring the highest mark in Jordan in the 1992 Pure and Mechanical Mathematics A-level exam.

According to her, Omar’s three older sisters – Yasmin, Sirin and Noor – supported her younger brother in his dreams and his younger brother Mohammad was very proud of him.

Omar’s talent for mathematics was discovered by his first grade teacher, Ritu Wasandani, who started giving him extra exercises.

When he was in fourth grade, his teacher Louise Cavanagh, head of the gifted and talented group at the school at the time, and Melissa Skilles, head of inclusion at the time, realised that Omar was getting bored and needed more challenging exercises.

They contacted his parents and devised a plan to help Omar Kilani succeed. By the second semester of fourth grade, Omar was attending maths with the sixth-grade students.

“What made results day special was the welcome from Ms Falhi, the headmistress of the primary school, who came especially to support Omar as he opened the results envelope. The look of love and pride and the warm embrace of all the teachers made Omar feel much happier. He felt he was in the midst of his extended family who loved and supported him from the beginning and will continue to support him.” – Ms Atallah said.