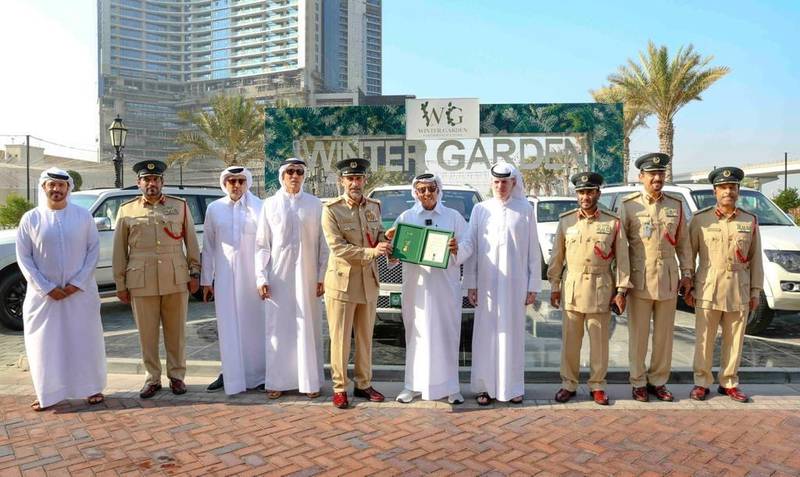 The vehicles were displayed and built outside the Al Habtoor Palace Hotel in central Dubai. Khalaf Al Habtoor said he considers it his duty and social responsibility to support the efforts of the police.

Lieutenant General Abdullah Khalifa Al Murri, Commander-in-Chief of Dubai Police, thanked the businessman for the noble act, calling him an outstanding representative of the UAE. Khalaf Al Habtoor is known to have contributed to the development of the UAE since its inception.

In April, the magnate donated Dh10 million to the One Billion Food Portions campaign for the needy. Food kits were distributed to the hungry around the world.

In March 2022, the Dubai Police announced an expansion of its patrol vehicle fleet with the addition of 400 more vehicles.

Last week, the Dubai Police added the first electric Hongqi E-HS9, manufactured by Oneroad, to its fleet of supercars. The SUV will sprint from zero to 100km/h in five seconds and has a range of 440km. It takes six to eight hours to fully charge the vehicle.

In December 2021, the Dubai Police Force began operating two German-made Audi R8 Coupe supercars. The stylish and powerful coupes with a 5.2-litre V10 engine producing 540 horsepower can reach speeds of up to 320km/h. In September 2021, a supercar Aston Martin Vantage, the favourite model of James Bond from the famous blockbuster, was added to the car fleet. The elegant sports car was given the symbolic number 77.

Today, the Dubai Police has more than 30 supercars in its fleet, including a Ferrari, Aston Martin Vantage, Bugatti Veyron, as well as several Porsche, Bentley and McLaren. A year ago, two models from Italian brand Alfa Romeo – the Stelvio Quadrifoglio and Giulia Quadrifoglio – joined the patrol.

The Dubai Police’s luxury patrol cars can be found around the world’s largest shopping mall, The Dubai Mall, on the emirate’s main streets. They also accompany celebrations and sporting events such as the Dubai Marathon or the UAE Cycling Tour.

The vehicles help boost the confidence of the emirate’s residents and tourists in the local police and are one of the popular attractions. “We want to show tourists and locals how friendly the Dubai Police are,” said the law enforcement agency.